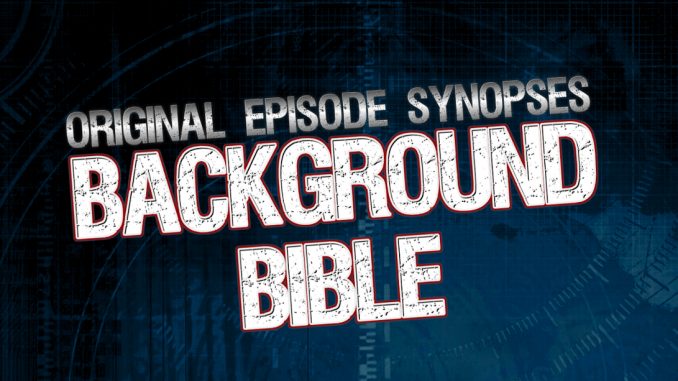 These are the original episode synopses which are listed with the Background Bible document. This document has circulated on the internet and been sold on Ebay.   We can’t prove that these are authentic, but it seems reasonable that they could have been first drafts for the episodes.  One copy of this document seen on Ebay had an issue date of April 1986, which would have been around the time season 2 was in planning.

STATUS: Made as The Human Factor

MacGyver finds himself in reluctant partnership with a brilliant, beautiful and infuriatingly stubborn female physicist — fighting a desperate time lock as they attempt to fight through the death trap of a top-secret security system — opposed by a sophisticated computer, which regards them as an enemy to be destroyed.

The story will take us to a top secret, military facility beneath a ghost town in the Arizona desert. MacGyverisms in this episode will include:

1) The use of a cutting torch made by combining hairspray and a pack of matches ..
2) Blasting through an obstacle via Xerox toning powder and a half-dozen flashlight batteries ..
3) Crossing an electrified grid safely with the aid of two cans of talcum powder and a discarded wet suit ..and
4) Immobilizing the computer nemesis with a shower of Freon “rain”.

The story begins at:

Rattlesnake Gulch. On the surface, a run-of-the-mill Arizona ghost town — but buried beneath its inconspicuous sand is perhaps the most modern, elaborate, top-secret military facility in the country. It is here where genius scientific minds break new frontiers, where the latest defense systems are developed and tested.
To protect this cradle of technology, JILL KENDALL, a brilliant, young MIT designer, has been contracted to create an invincible security system. Recently installed, the system is controlled by an ultra-sophisticated, fifth generation computer which Jill named Medusa.

With heat sensors, drones, and electronic surveillance devices, Medusa monitors its miles of endless corridors and laboratories much like a brain monitoring its body. To test and confirm the system’s effectiveness, the government has hired PETER THORNTON and his group of consultants — much to the annoyance of Ms. Kendall, who arrogantly claims Medusa is flawless. So far, Medusa has been checked and re-checked by every security expert Thornton can find — no hitches. Deciding it’s time for the real acid test, Thornton brings in MacGyver.

Our story opens as Thornton and MacGyver arrive at the hidden entrance to the facility. But before they even step inside, they trip the security system and set off a major alert — which turns out to be a prank, courtesy of Jill, who, tired of having her “baby” poked and prodded, is out to discredit MacGyver.

Despite MacGyver’s attempts to break the ice, Jill remains hostile and condescending. She gives him a tour of the facility, pointing out all of Medusa’s features, and assuring MacGyver there’s absolutely no way he can get around the system. Eager to show off some of the more exotic bells and whistles, Jill simulates a security leak. A little game she plays with Medusa to keep it on its toes …but this time Medusa doesn’t think it’s a game! In the blink of an eye, Medusa goes on red alert and “locks down”, trapping everyone inside. MacGyver’s pretty sure this is just another of Jill’s little jokes — but it’s no joke. Try as she might, Jill can’t convince Medusa that her security drill was merely a simulation. The only way to correct the malfunction is to get to the main computer terminal and override the program. But it won’t be easy- the system is designed to protect itself from intruders. Oh, and there’s one last wrinkle, Jill adds. It has a response-learning capacity — and because it thinks it’s under attack, it’ll go through three very specific states: analysis identification of attacking force, with a demand to cease and desist. If that doesn’t work, Medusa will activate concealed attack units. If they fail — Medusa will proceed to order the destruction of areas of Medusa’s own outlying system.
And if we get through all that? MacGyver’s fascinated. Jill shrugs. If we do — Medusa is programmed to face defeat — by locking into an irreversible self-destruct countdown. Medusa, the support system — and a goodly portion of the surrounding acreage. Including Jill, MacGyver and the other people locked into the facility.
MacGyver wryly gives Jill credit — at least she designed a thorough system.

Trapped in an underground maze by a super-intelligent computer programmed for destruction is less than an ideal situation for two people to get to know one another. If the sparks fly between MacGyver and Jill when they meet, the feelings intensify exponentially as the tension builds. Jill’s life has been dominated by intellectual pursuits, and she prides herself on her steely objectivity — maybe because she’s afraid of emotion. She’s always been a solo act and in control, believing in her own intelligence above all others. She dismisses MacGyver’s suggestions as worthless, his techniques juvenile. For his part, MacGyver is soon pushed to the limit by Jill’s attitude and becomes less effective as she slowly gets to him. If we ever see an end to his easy-going patience, we see it with Jill. Their predicament becomes a battle of one-upmanship until both realize that each has to give a little; each has to relinquish some control. Their survival — and the survival of the others trapped in the facility — rides on their ability to work together.

The original first draft of general character and show ideas in preparation for season 2 filming. Also includes 6 synopses for planned episodes, 3 of which were actually made.