The MacGyver 360 Project is an opportunity for cast and crew of MacGyver (classic and reboot) to say thanks to the fans for their dedication in helping to keep their work alive for so long.

While meeting at conventions or events fans can take a copy of the sign with them (see below for details) and ask the member if they would like to take a photo holding it which will then be posted here for the online fans to see. This provides a quick and easy way for them to acknowledge the loyal following the show has generated, of which they have contributed.

Cast and crew members are also welcome to print off their own copy of the sign and take a selfie of themselves holding it so we can post it here along with any information or messages you wish to share with the fans.

This project is covering both the classic and reboot versions of MacGyver so everyone gets a chance to take part and share 360 degrees of MacGyver appreciation.

Besides having him autograph a photo of him from the episode “Harry’s Will” I told him I’m a member of MacGyver Online and asked if he’d be willing to hold the sign you see in the picture below.

We met RDA for an interview while he was in Auckland, New Zealand for the Armageddon Expo.

After our interview I asked if he would mind doing this photo for everyone, to which he happily obliged.

You can read more about the interview and how the day went having coffee with RDA here.

A little over a week ago, Friday – Sunday September 11 – 13, 2015 I went to the Las Cruces Comic Con to assist a friend of mine with the manning of his company’s booth. LCCC is a rather small con (compared to denver, salt lake and san diego) so I wasn’t expecting much in the way of actors, so when I saw that actress / voice actress Wendy Schaal was going to be there, I was excited to say the least, and looked forward to the trip even more than I already was.

Wendy is AWESOME. Very friendly, personable and genuine, just as I hoped she would be. As it turned out, the convention organizers put us (me, cal and kim) up in the same hotel as the celebrities and Wendy’s room was down the hall from ours, something we learned on Monday morning 09.14.15 as we were leaving (we were leaving our room, wendy walked by on her way out and we spoke to her one last time).

I was able to get her to autograph a picture of her character Karen Blake from the episode “Death Lock” which caught her off guard. She asked where in the world I found it and I told her RDAnderson.com. I’ll post a picture of that signed photo soon. In the mean time, please enjoy the picture I’ve posted here.

Nana Visitor attended StarFest here in Denver, CO on March 11 – 13, 2016. I asked her to autograph two pictures, one each of the two characters she played on “MacGyver”: Laura Farren on “Hellfire” (s01e08) and Carol Varnay on D.O.A. MAcGyver (s02e21). She was more than happy to pose for this picture, even more so after I showed her the picture of RDA holding a similar sign (credit goes to kiwitek for that).

While I didn’t conduct an official interview, Ms. Visitor said the following (not direct quotes):

– RDA was sweet and a great guy to work with
– Filming “Hellfire” was tougher than she thought it would be. It was very hot and was done in a guerrilla style of filming.
– She didn’t / wasn’t able to keep anything from either of the “MacGyver” episodes she appeared on. The wardrobe department was very diligent about making sure everything was returned. She said she once had to return to the set to turn in a pair of ear rings she forgot to take out at the end of the day.
– While on Star Trek Deep Space 9, she was able to keep a fish statue or skeleton of some kind (I wasn’t a huge fan of ST: DS9 so I’m not familiar with what she was talking about) that hanged in the promenade section of the DS9. This fish later went missing from a self storage locker she had in up-state New York.

The 5th Annual Denver Comic Con (DCC) took place on June 17 – 19, 2016. One of the celebrity guests in attendance was Judy Burns, who wrote the opening gambit of the episode “The Gauntlet” and the episode “The Last Stand”.

Given that Judy was already interviewed by MacGYVER Online, I asked her if she would be willing to pose for a picture, holding the sign, which she was more than happy to do.

I was helping some friends of mine run their company’s booth and didn’t get away to attend any of the several panels Judy gave discussing script writing. While I was pretty bummed about that, I was able to speak with her, at her table in the Artist Valley section of the convention floor, for a total of about a half hour over the course of the weekend. I found her to be very approachable and a very easy & interesting person to talk with. Given that she doesn’t usually do convention appearances I am thrilled to have met and talked with her.

Judy, if you’re reading this, THANK YOU AGAIN for coming to DCC, talking with me and answering my questions. It was a pleasure to have met you.

Here is the picture I took, back in August of 2016, of Richard Hatch, holding the “Thank You . . .” sign while he was appearing at the Ft. Collins Comic Con.

Best know for his roll of Apollo in the original Battlestar Galactica; Richard of course played bad-guy Michael Talbot in the season 2 MacGyver episode Three for the Road. 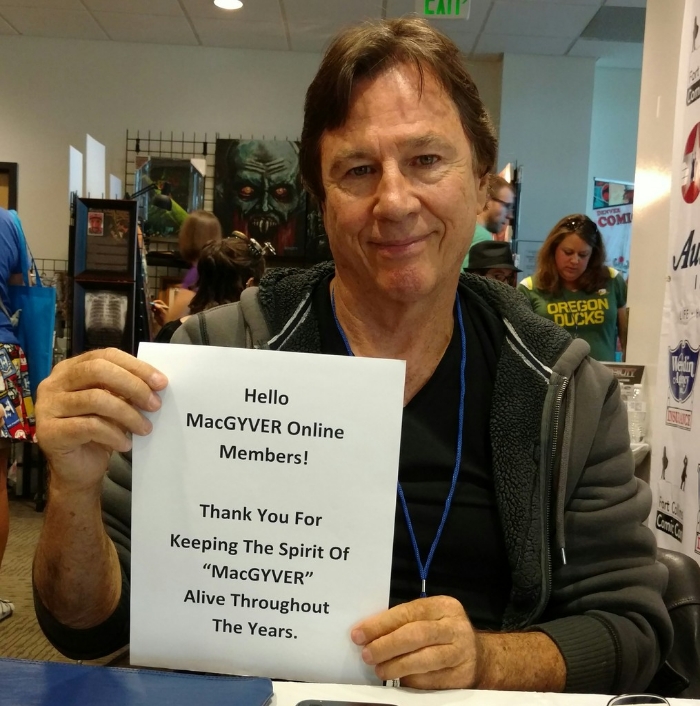 Fans:  If you’re going to a convention or event to meet actors or crew who have worked on MacGyver you can offer them the chance to take a photo with the sign which will then be posted here for the fans to see.

Cast or Crew: If you’re a cast or crew member of either the original or reboot MacGyver shows and would like to show you’re appreciation to the fans you can also send in a photo holding our sign. Give us some information about what you did on the show, memories, or any other comments you would like to share with the fans. Then use the below form to send it to us.

Both RDA and MDB are appearing together at the Rhode Island Comic-Con this weekend.

Richard Dean Anderson will be appearing at this years Raleigh Galaxycon July 27 – 28 in North Carolina.